Even though dividend income for the month was a little lack luster, I couldn’t be happier with the numbers.  Admittedly, it’s because net worth turned out so incredible (thanks to the pie in the sky prices provided by zillow).  Wrapping up the four months of 2016 has provided some rather interesting surprises that I regretfully must report.  Let’s get to it! 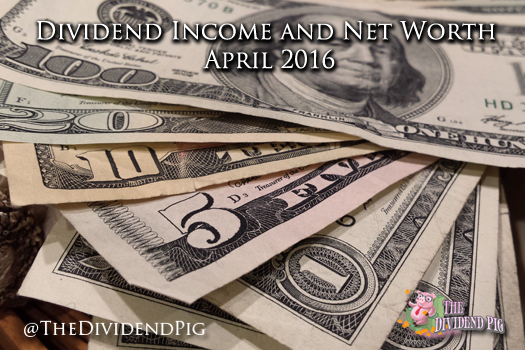 Below is the breakdown of the April dividend payments.

*Small disclaimer – Symbols with * next to them actually paid on the last day of March.  I missed them in my last report so I included them here.  Therefore, I technically only received $114.81 this month (5.91% YOY increase).

The pie chart below also shows the percentage of each payment.

And on to some disturbing dividend income news.  After doing some really tough math, (basic addition & division) I’ve discovered that I’m extremely far behind on my goal to make over $3,000.00 this year in dividend income.  So, it looks like I need to invest roughly $20,000 over the next month or two in order to get close to reaching my yearly goal (or get some significant dividend increases).  I have a lot of work to do!

WOW!  April has been HUGE!  Property values have exploded now that Spring is here (I guess?).

Lets do the numbers… 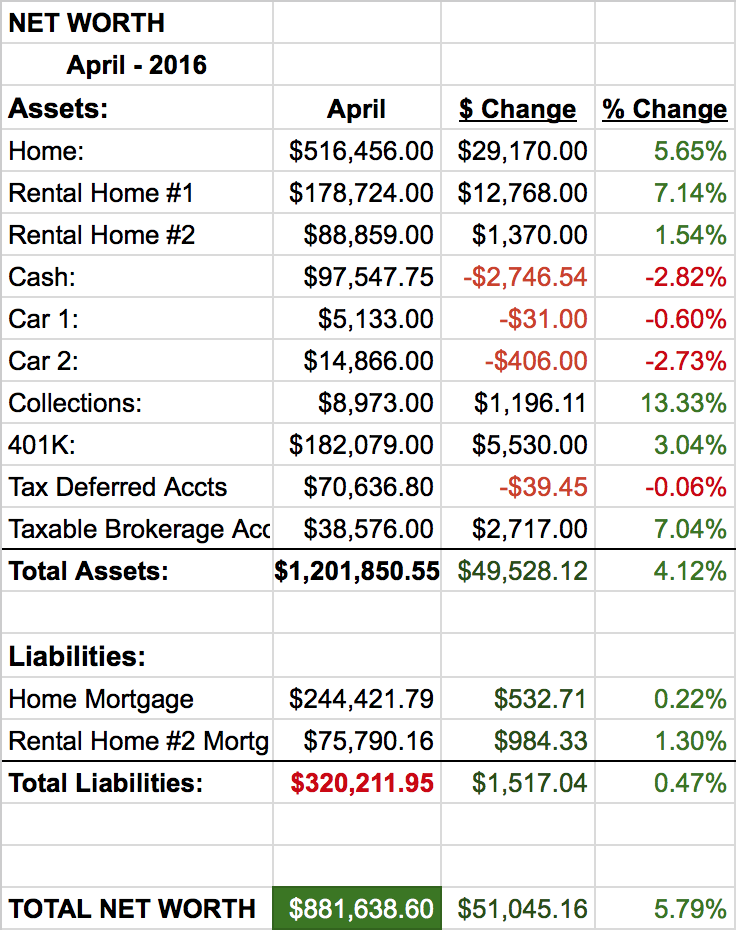 As mentioned last month, we are having to pay more and more “hidden” hospital bills from my wife’s surgery a few months ago.  Having surgeon helpers that are “out of network” is crap.  I guess they have some sort of waiver by the hospital to not to have to take insurance?  We have a bill for a surgical nurse that is 3 times more than what the actual surgeon was paid… crazy!  Anyway, we also put some cash into the taxable brokerage account which came out of savings.  I think we are now squared away with hospital bills and now have to move on to the home improvement cash siphon.

Holy moly!  Big time jump here.  Like I said above, I’m assuming the jump is from some recent sales and the fact that we are into the traditional house buying season. Makes sense, more people buying equals higher prices, right?  Anyway, a huge jump for our primary home of almost $30,000 seems a little over the top, but I’ll take it. Rental property #1 is up $12,000 and is almost what I bought it for it in 2007!

My cars’ values have been declining like normal.  They average negative .5 – 2% down every month.  I am constantly amazed at how much money people waste on expensive cars in my area.  Around here, half of vehicles on the road are luxury cars, purchased new.  I think back on the infographic located on the bottom of my how to buy a used car post that shows after 5 years, the average car is worth just 37% of what you paid for it new at a dealership.  That’s some serious depreciation people are taking on their cars.

So, there it is!  A great month in terms of net worth (thanks to houses appreciating) and alright news in terms of dividend income.  I have a long way to go to reach my goal of earning $3,000 in dividend income this year.  Fortunately, I have cash in the accounts!  The hard part is finding dividend growth stocks at suitable values!  I don’t know where this market is going long term.  This last week we’ve seen a little bit of a correction but I suspect its very short term and I bet we bounce off the 50 day moving average.  I’ll keep researching.  You can expect to see some extra buys from me this month.

What dividend growth stocks have you been buying lately?