Here is the dividend income and net worth report I’ve been itching to write.  This year is flying by, and I hit it out of the park with this month’s dividend income.  March’s dividend income not only sets a record for the month, but is also the highest since I started tracking!  I’m very excited to report this progress.  Lets get to it! 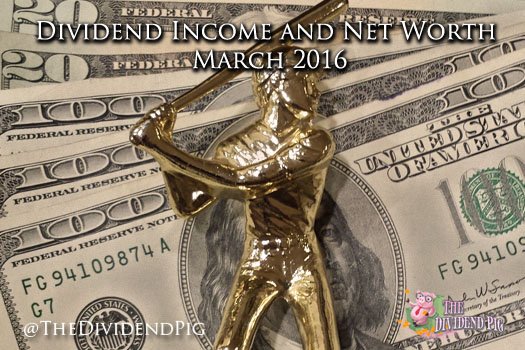 This is the month that puts all my other dividend income months to shame, and by not just a little.  Finally, this is the month where we actually begin to see some substantial progress in terms of dollars.

This month I received $339.17 from some of the best run companies in the world in dividend payments.  You can see on my dividend income graph that this not only sets my monthly record, but it also surpasses my yearly and lifetime record… by a lot!

This is a gigantic 168.11% increase from March 2015.  These kind of growth numbers not only keep me interested, but keep me really hungry for more.  I received 28 different paychecks for an average of $12.11 for doing nothing other than making some smart buying decisions.

Below is the breakdown of the March dividend payments.

The pie chart below also shows the percentage of each payment.  Ford (F) paid a special dividend this month that bumped their payment up quite a bit.  Other than that, the oil and gas sector (CVX & XOM) is paying a rather large percentage of March’s dividend payments.

March has also been a fantastic month for net worth as well.  Property values seem to have leveled off after their large declines over the last few months.  I filed my taxes early and was able to pad some large cash out flows with the money I loaned the government at a whopping 0.00% rate.

Lets do the numbers… 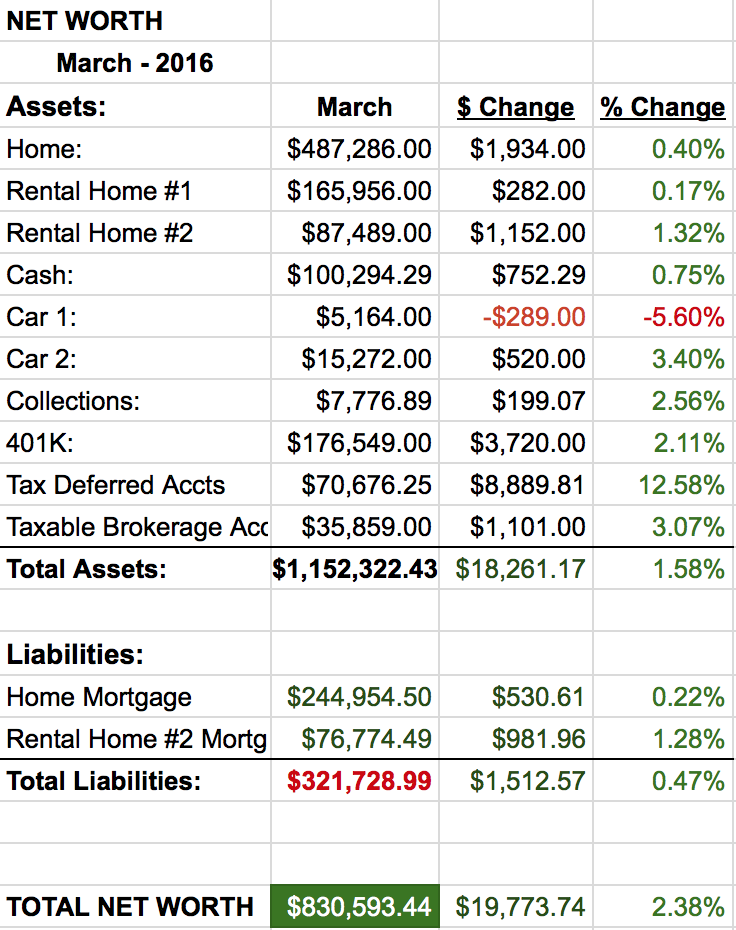 As you can see, we are positive again!  Sadly, I don’t think I’ll be able to keep it above 100k for much longer.  We are now expecting several large, surprise, hospital bills for my wife’s surgery she had last month.  These should be somewhere in the $3,000 – $4,000 range.  I also have a lot of work to be done on our house that we will now actually begin.  A large portion of the cash has been earmarked for these necessary home improvements.

As I mentioned, I efiled my taxes early and received pretty much enough to cover my wife’s ROTH IRA payment for the year.  I’ve used our tax refund two times now to cover her yearly ROTH contributions.  So, the majority of the $8,000 increase in the tax deferred accounts came by way of a $5,500 cash contribution.

Property values have increased some this month which has helped push my net worth up.  While these numbers change monthly, I think the important part of this is the real estate debt payoff.  Looking back at my June 2015 net worth report I showed that I had over $336k of real estate debt.  That means in less than a year (10 months to be exact), I’ve paid off almost $14,500 of real estate debt!  I don’t know about you, but that sounds like A LOT TO ME!

We all know cars don’t do so well when it comes to retaining value.  Oddly, my wife’s car has appreciated in value again.  While my car has taken a dramatic nose dive of 5.6%.  Whatever you say KBB.

I’m trilled with the progress made this month.  Dividend income is really starting to roll along, my family is in good health, I’m paying off big chunks of mortgage debt and my net worth is shooting up, almost to new highs (+ almost $20,000).  Regarding the market, you can see I’m collecting cash in the dividend portfolio waiting for some values.  Quality dividend growth stocks aren’t as easy to find as they were in January this year.  There are a few new companies I’ve been eyeing and have already set limit orders.  I’ll add them to my watch list (that I’ll be posting later this month).  The market seems to have put the FED in its place and has clearly established who dictates terms to who (hint, its not the FED right now).  Until that changes, we may be tracking our way to setting some new records in the coming months.  However, with earnings season arriving and stock prices up, we’ll see how things shake out.