Hank and I determined it would be wise to start at the beginning as to why I wanted to retire early.  He sent me a few questions that he thought were pertinent.

Why do you want to retire early?

While on a business trip last week, I calculated that I spend 60% of my waking hours at work, 10% in traffic and only 16% of my conscious time at home with my family Monday thru Friday.  (check out our shared google work/life calculator spreadsheet to calculate your own life/work balance) 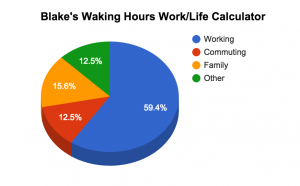 I want to retire early to reverse those percentages.  I’d like to spend quality time with my family, not tired just got home from work time with them.  Beyond that, I want to retire from the corporate corn hole game and stressing about things I have very little control over.

I think Ferris Bueller said it best: “Life moves pretty fast, if you don’t stop and look around once in awhile, you could miss it”.  After 2 decades in the workforce, I’ve missed plenty of life without looking around.  I want to retire not because I’m lazy or feel entitled to a relaxing life after only 20 years in the work force, it’s that I want to spend the quality time with my family before old age and sickness becomes an issue.

Has that always been a goal of yours?

No, but I wish that were the case.  If I had started down this path out of school I would be “retired” now.

I guess I first learned of this alternative lifestyle about a year ago.  I was on a trip several time zones away and my wife called me in the middle of the night.  She was having a scary migraine (she has different levels of migraine pain, but scary is the one where she is worried of an aneurysm) and there was nothing I could do to help.

At that moment, I knew I needed to come up with a new plan.  I did what most people do and looked it up on the internet. I found and read about people living what I now consider the ideal lifestyle.  I ran through some numbers and realized I could also retire early. (I’ll show the rough calculations spreadsheet in another post)

What will you do in retirement? What’s your dream?

Whatever I want.  As I mentioned earlier, I want to spend more quality time with my family.  I don’t have a traditional sit on my butt, play golf and die slowly retirement plan.  Heck, I’ll still be relatively young.

I’d like to spend more time woodworking.  I’d also like to start a small business of buying, repairing and selling distressed homes for new young families.  I’ll keep active and be productive; I’ll just do things on my own time.

Will you still work a little? Why?

Buying, repairing and selling old broken down homes sounds like a fun pastime. Especially since I could work on them whenever I wanted.

In my later years, my wife and I would like to move to Florida and maybe get a part time job working at Disney World.  We met a nice man who was a retired USPS postman who gushed about how much he enjoyed the job and hours of working at the theme park.  That seems like fun.

In my opinion, the moment you stop living for a purpose is the day your life is over. Nothing good comes from boredom.  I’ll keep busy and productive; I’ll just do it on my own schedule.

Is this a new goal? Have you been planning since age 22 for this? If not, do you feel behind then?

It’s somewhat of a new goal, roughly a year or so in the making.  I do feel behind, close to 10 years behind.  But that’s the beauty of this; you’re never too far behind to catch-up and earlier is better than later.

However, if I had been planning this since I was 22, I would be retired now.  If I had started this at 22 I also wouldn’t have made some huge financial mistakes recently like purchasing my house that’s much larger than we need.

If only had I started at 22 I would be playing a board game with my family instead of writing this on a plane many time zones away from the people that matter most to me.

What do you plan on giving up / forgoing now in order to have an early retirement?

I won’t buy as much stuff.  But frankly, I can’t imagine anything better than not having as much stuff right now.  I won’t need as big of a house because I won’t have as much stuff to put in it.  I also won’t have to spend as much time cleaning and maintaining a big house or the expense of the large property taxes.  I’m sure there will be plenty of other “sacrifices” like not eating out and canceling cable but nothing I can’t easily live without.

I watch fight club a lot on long flights (its ironic that airlines choose to show this movie as it’s about removing the cultural and corporate influences from our lives that the airlines need to thrive) and the Tyler Durden line, “The things you own end up owning you” always spoke to me.

I think we’ve so ingrained in our culture that working till we drop to buy more stuff is the American dream.  Well, not for me, not anymore.   I think if anything, my quality of life will increase without as much stuff cluttering it.

Too Late to Retire Early?