Over the past decade, XOM has managed to grow revenue by an average of 6.8% a year. This number, (and pay attention to this, as it holds true for all of their financials) is to be taken with a grain of salt. The business of energy, at least in the way it pertains to XOM, is

Fundamentally a commodity business. This means XOM’s operations and earnings may be significantly affected by changes in oil, gas, and petrochemical prices, and by changes in margins on refined products…these in turn depend on local, regional, and global events or conditions that reflect supply and demand for the relevant commodity. (Exxon Mobil 10-K, 2011)

So this business is cyclical, and highly unpredictable. Events ranging from rebellions in Libya to spills in the gulf can affect oil prices, and hence profits. So while I look at growth rates over 1, 5, and 10 year periods, realize that these may be lower or higher than normal operational potential due to price and demand fluctuations.

Sales increased in the past year by 23.4%, a healthy jump, but still lower than the strong revenues of 2007 and 2008. Still, sales were up across the board, from all three divisions: Upstream, Downstream, and Chemical. 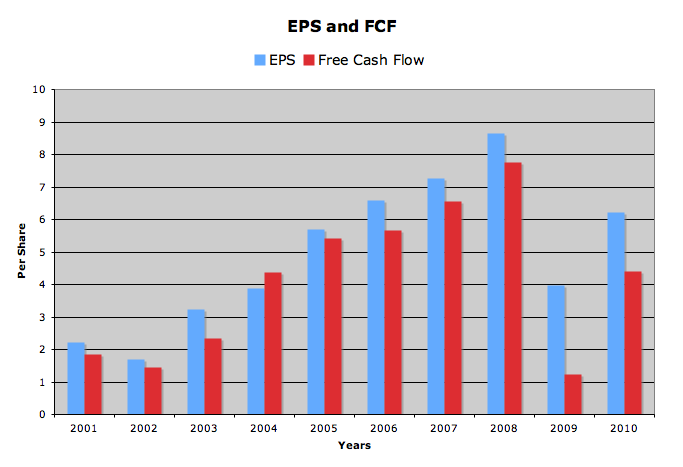 Cash flow follows closely with earnings, and though at times XOM threw off huge amounts of cash, when earnings dive, so does fcf. Still, we know this business can generate cash, which is always a good sign for a dividend investor. 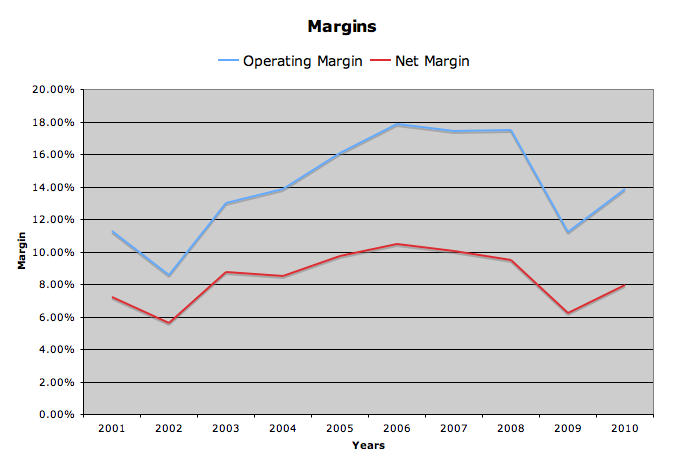 In addition, XOM has a huge stock buyback program, initiated in 2000 and still going strong. They have averaged an 8.4% buyback rate per year for the past decade, and plan on continuing at this pace of roughly $5 billion a quarter, at least for Q1 of 2010. Based off of dividend growth rates, I would sacrifice some spending here in order to raise the growth rate. 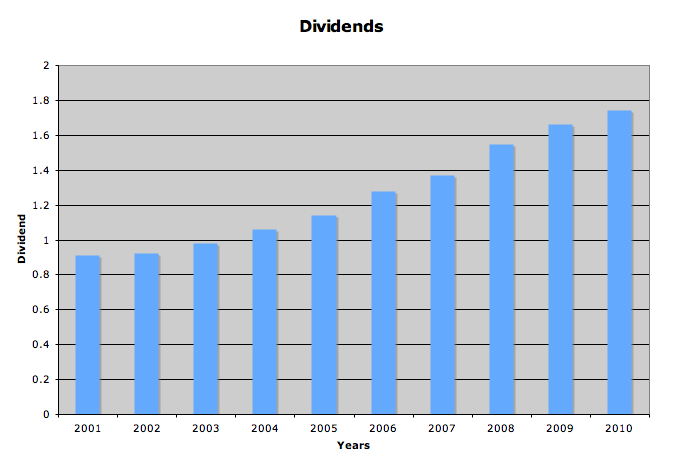 The dividend CAGR of 7.4%% for the past decade is not great, especially with the low yield XOM carries. Looking at the 5 year rolling growth, I see that growth was accelerating in the mid-2000’s, reaching a high 5 year average growth of 9.9%. This declined to 8% using 2010’s dividend, which was a measly 4.8% increase from 2009. 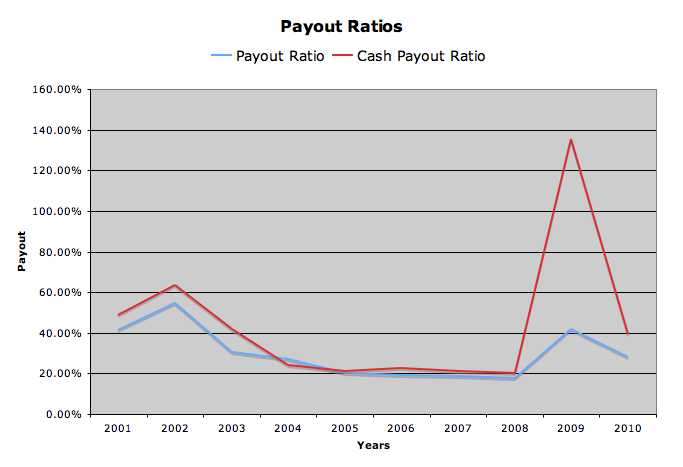 Both payout ratios, earnings and cash based, are pretty conservative, averaging just 30% of earnings and 43% of fcf. With such variable earnings, I see why XOM tries to keep it’s payout ratio rather low – this allows for those large fluctuations without causing a dividend cut. Only once in the past 10 years did the payout ratio reach over 100%, and that was in 2009 (a very poor year) and was the cash based ratio – I’m ok with this, since a company like XOM can easily borrow for one year to cover any dividend payments.

The balance sheet of XOM is pristine. Debt comprises only 9% of total capital, and in a business that is very capital intensive, that’s a great sign.

The current ratio is low at 0.94, slightly lower than the generally accepted “safe” level of 1. $30 billion in earnings in 2010 is more than enough to repay the roughly $15 billion in total debt the company has in only a few years. 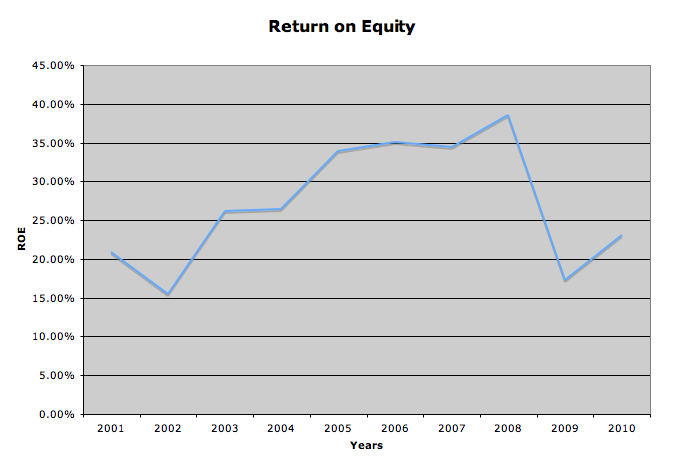 Return on Equity has bounced around a bit, which is to be expected. Still, it never dropped below 15%, and has averaged a healthy 27.2% over the past decade.

Exxon Mobil is not the type of stock to get excited over, for 2 reasons. 1) It is definitely a defensive play. I doubt you will see major price shifts in either direction, so it’s good for a solid, stable, dividend payer to backbone your portfolio. 2) Investors have already priced in the rising oil prices. Looking at the historical high p/e, for the past decade the high p/e has been in the mid teens. The current p/e of 13 is pretty normal – I would not expect it to go much higher than this. XOM was a great buy in the 50’s and and 60’s, when it was trading at 7-10 times earnings. With a low 5 year expected growth rate of 4.9%, moderate dividend increases, and a low yield, I would not purchase at these prices.

I still think XOM is a great company. And with their expectations of huge energy demand increases over the next 30 years (population increases to 8 billion, 35% increase in energy demand, 40% increase in energy for transportation, and liquefied natural gas demand expected to triple) there is definitely room for growth. But for such a large company, that growth will have to come slowly.

Full Disclosure: I am long XOM. My Current Portfolio Holdings can be seen here