Revenue for Lockeed Martin has grown by an average of 7.3% over the past decade, and about 4% over the past 5 years. The 4.1% growth between 2009 and 2010 fit in line with that average, though going forward even this slight growth rate may be optimistic.

The most recent earnings release came at the end of October, and the close of Q3. Sales grew both quarter over quarter and year over year, but the company’s guidance for 2011 is $46 – $47 billion. Even if we use the top end of the estimate, that’s only 2.6% growth.

Worse still is the company’s outlook for 2012

It is worth keeping in mind this does not count the *possible* massive budget cuts that would hit defense spending should the so called “super committee” not reach an agreement by November 23. 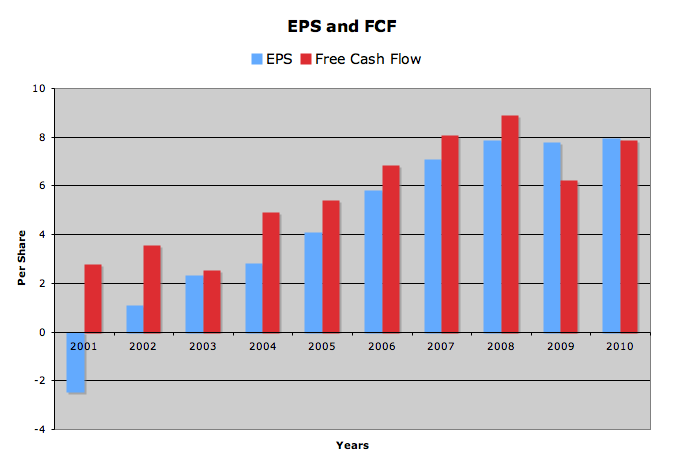 Earnings have shown stronger growth, a combined result of increasing sales, higher margins, and a healthy stock buyback program. 10 year growth is unavailable, since LMT operated at a loss in 2001, but the 5 year average growth is 8.2%.

Again though, only modest growth is anticipated going forward. Analysts are expecting earnings of about $7.58 for this year, and LMT’s outlook estimates between $7.40 – $7.60. If LMT hits the top end of that range, that is still an earnings decrease of 4.3%.

Free cash flow per diluted share has grown by an average of 12% over the past decade, and has not had a single negative year. Though 2009 and 2010 were down from the 2008 high of $8.89 a share, the fcf was still enough to comfortably pay the dividend.

Both earnings and fcf have been bolstered by a steady share buyback program, and LMT manages to take about 5% of outstanding shares off the market every year. So far in 2011, they have bought back 29.9 million shares, using $2.3 billion. By the end of the year, they expect to use a total of $3.5 billion on repurchases. 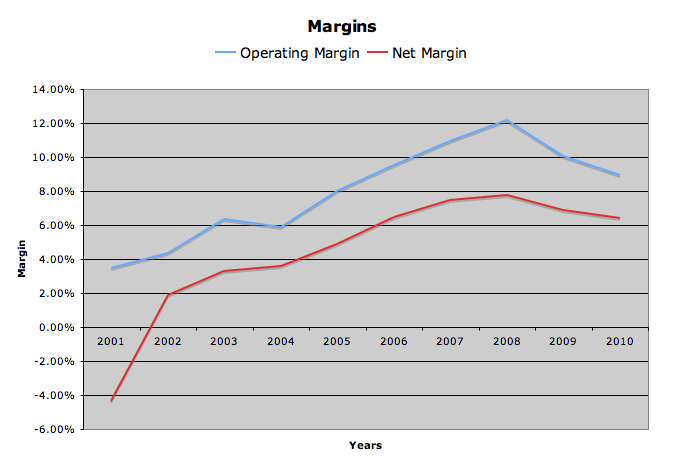 LMT has a long history of paying dividends, but only began regular, yearly increases in 2003. If we discount the year 2002 (where the dividend was flat) purely for calculation reasons, the 10 year average growth is a whopping 21.8%. Over 5 years, that number is 20.6%. And the latest dividend increase, which came in September of this year, was a massive 33% raise, from $0.75 to $1.00 per quarter.

This last dividend increase is interesting, because it really made the yield explode. Historically, you could expect a yield for LMT of around 2-3%, and if you were lucky close to 4%. But that last increase pushed the yield over the 5% barrier. 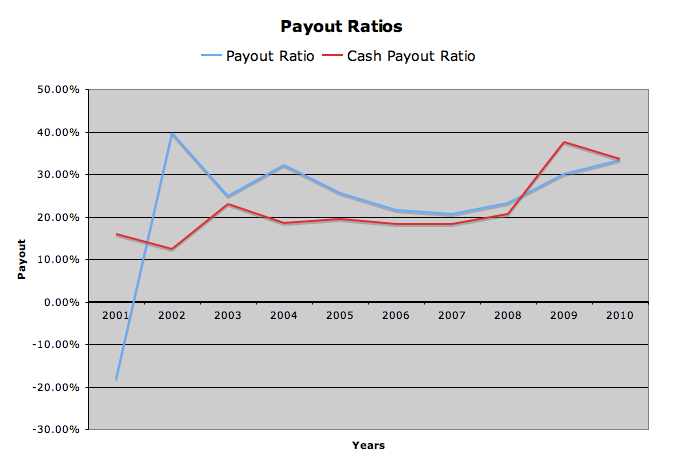 Lockheed Martin has a moderate balance sheet. The current ratio is 1.2, and the interest coverage ratio is 11.9. Debt to total capital is a bit higher than I like to see, at 57.5%, though this should go down over the next few years, as LMT pays off old debt with new issues at lower rates (they recently sold some 5 year notes at 2.13%!) 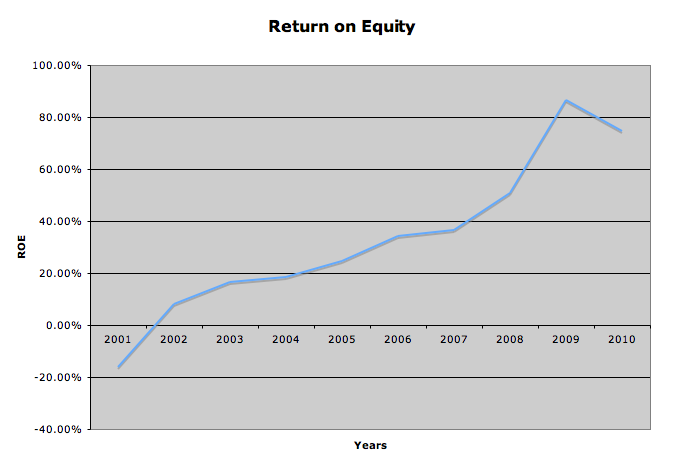 Return on equity has skyrocketed over the years, and is not a useful measure for this company. The artificially high 86% ROE can be attributed to high debt, and stagnant equity. Looking at year 2001, total shareholders equity was $6.4 billion. By 2010, equity had decreased to $3.7 billion. Though I know calculating equity is more complicated than this simple explanation, don’t you want a company to increase assets faster than liabilities?

Overall, I will pass on Lockheed Martin. The defense industry is very vulnerable right now, and if I planned to ride out this volatility with any one company, I would not choose one with high debt and no sales growth. Even though they have spectacular dividend growth, I still expect any company I invest in to be growing sales and earnings, rewarding me with income and capital gains.

To see other analysis of defense stocks, check out L-3 Communications

Full Disclosure: I do not own any LMT. My Current Portfolio Holdings can be seen here