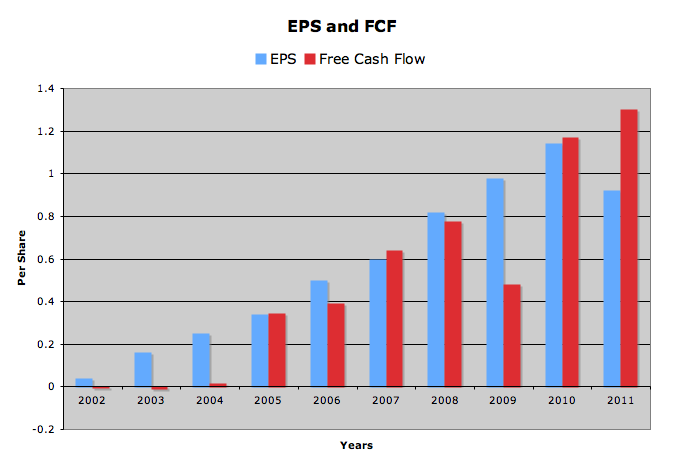 EPS has grown by an average of 41.2% a year for the past decade, which is very impressive. This is the result mostly of increased sales and earnings – over this time period outstanding shares have risen by about 3.5% a year.

Free cash flow per diluted share has also seen a steady rise, from $0 in 2002 to a solid $1.30 in 2011. Although I don’t usually like to see companies with any years of negative free cash flow, (which PETS had in 2003), the strong growth and relatively small size of this young company allow me to cut it some slack.

Margins have been showing quite an uptrend. Gross margin has dipped some, from the low 40’s in the early aughts to about 36% now. However, more than balancing the drop in gross margin has been a steady rise in both operating and net, with operating growing from 2% to 17% and net from 2% to 10%. All margins dipped in 2011, and this may be something to keep an eye on – declining margins could signal a faltering company .

PETS has only paid a dividend since 2010, so it’s to immature for most serious dividend investors. But that doesn’t mean it’s not a worthwhile investment – a journey of one thousand miles begins with 1 step – or so I’ve heard. 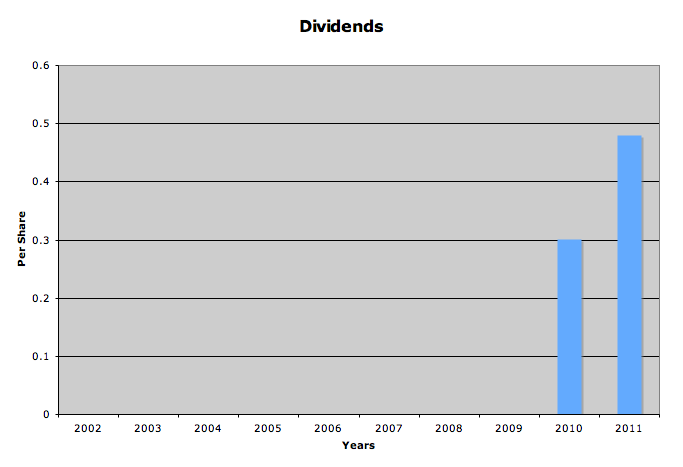 In addition to the dividend, PETS has recently instituted a fourth share buyback program for 20 million. Not exactly huge numbers, but PETS has managed to take about 1.7% of its shares off the market since 2007, and this should continue at about the same pace, or even slightly faster, since the price has fallen from it’s highs of low 20’s to its current price of $10.82 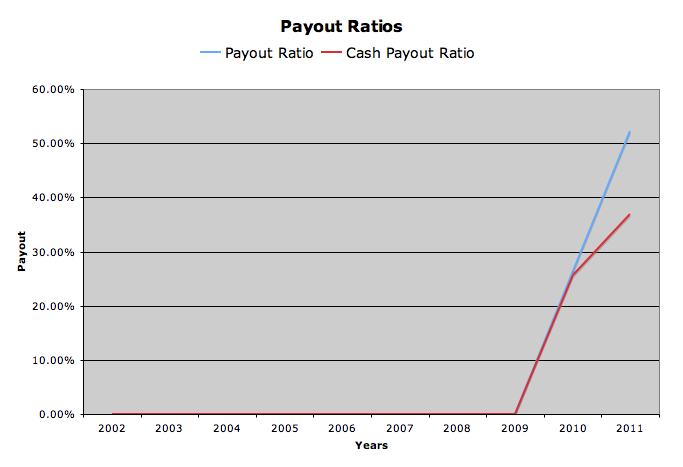 There is not a whole lot of information to go on for payout ratios, since the dividend is so new. But just to say we have, let’s look – as far as the earnings based ratio, the payout shot from 26% in 2010 to 52% in 2011. This is a bit worrisome, especially considering 2012 may be even worse. PETS has claimed on their website a desire to continue paying a dividend.

Cash wise, they are in a bit better shape. The payout ratio was 26% in 2010, and only 37% in 2011. This leaves some breathing space, and though I wonder if we will see a dividend increase this year, I at least feel confident the dividend will not be cut – at least not yet.

The balance sheet here is not just clean – it is totally pristine. The only other debt-free company I have analyzed was Microsoft, and even they have taken on some debt in the past few years.

And honestly, if you have a solid business, why not? If you can borrow at 4% and return 6%, borrowing can be a smart move. Just look at Walmart, which had a huge bond offering during the recession at an incredibly low rate (I’m not sure how much but below 5%, and these were 30 year bonds).

Nevertheless, this company is rather conservative financially, so we know it won’t be drowning in debt anytime soon. 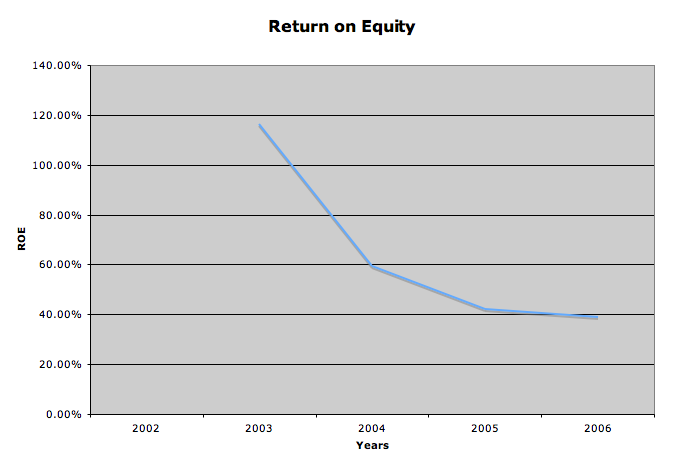 This ROE graph at first glance looks abysmal – how did ROE drop from the high 40’s to the low 20’s in the past decade? Well, there is a little more to this story…

But they paid it down over the years, and since return on equity can be inflated by debt, their ROE has declined. At the last available level (2011) of 21%, that’s still very good – but PETS has been debt free since 2005, and ROE has been declining every year. Again, if you’re an investor, something to watch.

The US market for pet healthcare is large, growing, and showing signs of strength. Americans spend about 45.4 billion on their pets every year. This number will increase with time, especially since pets (much like people) are living longer and getting fatter. Of that 45 billion, It’s estimated 27% of that total cost will be for veterinary and pharmaceutical care.

Another positive improvement in the pet healthcare market is pet insurance, offered by about 1600 companies nationwide, including monsters Office Depot and Google. The insurance can cover some of the more recent developments in pet care, such as MRI scans and stem cell therapy, in addition to medications. The largest US provider, Veterinary Pet Insurance, grossed about 149 million in 2007.

With this influx of cash into pet medicine, some large pharma companies are getting into the business – such as Pfizer’s Slentrol for weight loss and Eli Lilly’s Reconcile for separation anxiety. The pet med market is still mostly flea, tick, and worm control, but as more drugs hit the market we should see an increase in other types of prescriptions.

Pet business is booming, but can PETS take advantage? I don’t think so, because the company operates against a number of disadvantages.

First and foremost, most of the pet medication market, about 70%, is controlled by veterinarians. This will be a hard market to break – for one, I doubt vets want to give up this easy, low cost business. Second, it’s convenient – you can grab the medicine before you get out the door. And third, it’s very easy for vets to discredit any online retailers. They just tell pet owners that sometimes discount online medication is not the real thing. This scares pet owners, and I have read a number of comments online where people worry about this issue.

Another reason is a lack of customer loyalty. When shopping for discounts, the biggest price cut wins. If I can buy the same medicine from Amazon for cheaper, I’ll go there. Customers don’t have a strong reason, or high cost, for switching retailers.

PETS has shown strong performance over the past decade, but the engine of growth seems to be slowing. I just don’t see enough compelling evidence to want to enter a position.

Full Disclosure: I do not own any PETS. My Current Portfolio Holdings can be seen here

Research for this article was done here here and here