Rocky Mountain Chocolate Factory (NASDAQ: RMCF) is an international franchisor and confectionery manufacturer. The Company is engaged in the manufacture of a range of chocolate candies and other confectionery products.

Rocky Mountain Chocolate Factory is a small company, mostly comprised of franchised retail stores and kiosks. Formed in 1982, and with a market cap of just 62 million, this is not the typical dividend paying company. I hesitate to even it call it that, since it’s dividend history is so short, paying their first full year of dividends in 2004 at 10 cents a share.

The company began raising it’s dividend every year, but quickly realized it did not have the earnings power to do so. It’s been stuck at the current annual rate of 40 cents since 2009, and when 2010 earnings declined 3.3% from 2009, the payout ratio reached an unhealthy 69%. This graph shows the increasing payout ratio over the years. 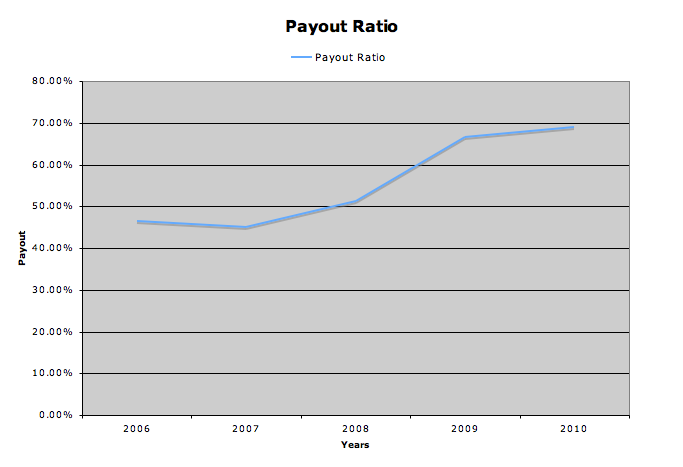 Looking at dividends in relation to cash flow, we see a different picture. 2010’s 5 million dollars in free cash flow was more than enough to cover the 2.4 million dividend payments. And unlike earnings, free cash flow has seen steadier growth, averaging 10.3% annually for the past decade.

Particularly problematic for RMCF has been sales and earnings. Revenues have grown by only 25% over the past decade; and this is not average annual growth, but TOTAL growth. Sales of 22.6 million in 2001 peaked in 2008 at 31.9 million, and RMCF has been losing sales since, down to 28.4 million in 2010. FY 2011 looks a bit more promising, and though Fy 2011 numbers are not in yet, I expect an increase. In the 9 months ending Nov. 30, 2011, sales had already risen 12.8% from the same period last year, and the strong holiday season should keep this momentum going.

Earnings have followed sales, peaking in 2008 and falling since. This graph shows the past 5 years of sales and earnings, and illustrates their negative progression. 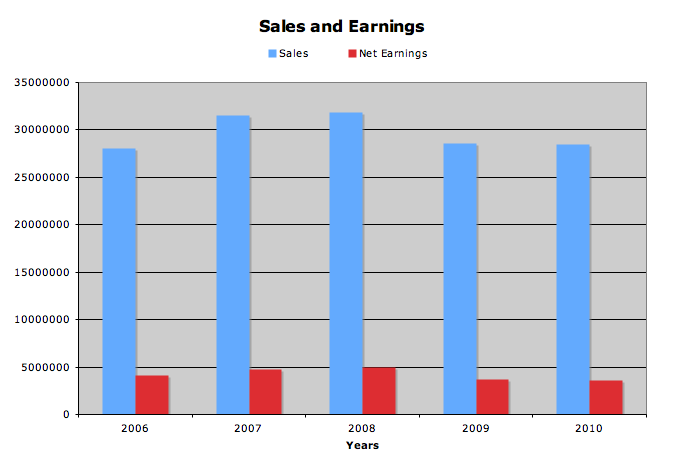 The slump in these two metrics is somewhat expected. The past few years have seen one of the deepest recessions in US history, and I can imagine few things more expendable then baskets of fudge and caramel apples. But 2010 (FY2011) saw a consumer resurgence, and a few strategic business moves coupled with multiple new store openings should begin to show profits. The improvement that stands out most is an increase in comparable stores sales. Assuming the fourth quarter continues the trend, this will be the first time since 2007 comparable store sales did not decline.

Gross margins have been trending down, but this is common among businesses involved with food sales. What is really appealing here is that both operating and net margins are increasing. RMCF cites additions of automated factory equipment, advanced planning systems, and better Point-of-Sale programs for this reduction in costs. They also own their own trucking fleet, which not only helps reduce shipping costs and efficiently moves product, it also adds a small amount of revenue, since they lease out the space to third parties during return trips. This graph is a visual representation of the companies margins over the past decade. 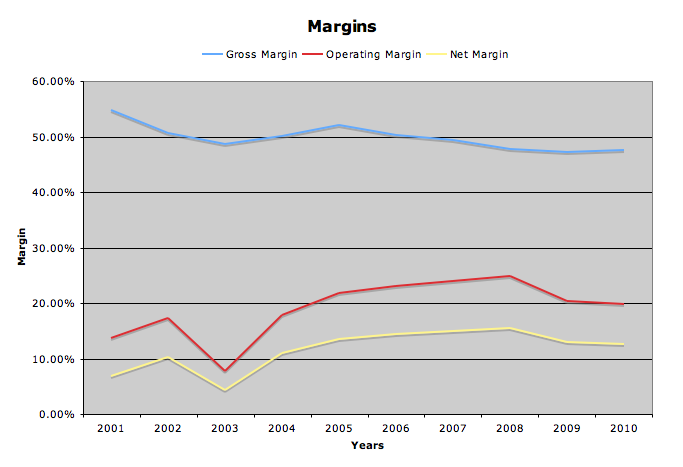 As for the balance sheet, it is pristine. Over the past few years they have been diligently paying down debt, and there is currently none outstanding. A current ratio of 3.71 is solid, and shareholder equity has grown by an average of 8.32% annually for the past decade. A return on average equity of over 20% for the same time period is quite impressive, especially since ROE has been growing as debt has been decreasing, as shown here. 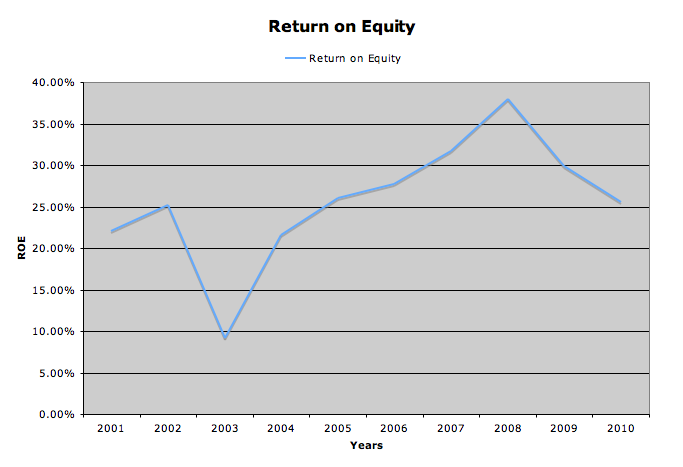 In 2007, Rocky Mountain teamed up with Cold Stone Creamery, a well known, and well liked, ice cream store in the US. By co-branding their stores, it has allowed RMCF an opportunity to enter markets it previously couldn’t, since the small chocolatier could not afford the rent and operating costs of more prominent locations. This past year they added 19 more Cold Stone co-branded locations, and expect an end of year total of between 23-25. Add in their latest venture, a single Aspen Leaf Self-Serve Frozen Yogurt store (a wholly owned subsidiary, whose business is rather self-explanatory) and that brings RMCF’s total store operations to approximately 400. The company plans on continuing to increase franchised stores, kiosks, co-branded stores, and yogurt shops in the coming year.

The majority of these stores operate in the US, with the bulk of the rest in Canada. A few stores (about 5) operate in the Middle East, mostly in the United Arab Emirates. This I find somewhat unusual…Why would a small, growing US confectioner enter into an agreement to open stores in the Middle East, of all places? Though those stores only account for 3% of total revenue, I still find it to be a rather peculiar choice for international expansion, especially when they could have put more effort into expanding into the Eastern US, where they have very little exposure.


I could not find any expected eps figures for this fiscal year, but I assume an increase in eps for Fy 2011, and hence a lower forward p/e. I was also unable to find expected 5 year growth, so I did not provide a peg ratio. The stock yields 3.89%, which is quite a yield for this kind of company, though not as exciting as a 9.8% yield it had when it hit $4.08 in 2008. It is selling at 4.7 x tangible book value, which is a bit high, but otherwise I think the valuation is reasonable.

If you’re a serious dividend growth investor, I think RMCF deserves a spot on your watch list. They are a growing brand, and have shown a commitment to paying dividends and increasing them, even if they jumped the gun a bit and froze growth for a few years. Co-branded stores and the acquisition of Aspen Leaf shows diversification, a must for any long-term growth strategy.

For me, it’s a bit early to enter. I’m more concerned in seeing consistent growth along all fronts; sales, earnings, and dividends. But with such a small footprint, entering a position in a few years still leaves plenty of growth opportunity. Who knows, in 20 or 30 years Rocky Mountain Chocolate Factory may be the next Mcdonalds or Yum! Brands. We will just have to wait and see.

Full Disclosure: I do not own any RCMF. I am long MCD. My Current Portfolio Holdings can be seen here