Yum! Brands: Dividend Growth with A Side of Debt

Yum! Brands has a similar business structure to McDonald’s. The company owns and operates some restaurants, while independent franchisees own and operate the rest. This is a great business model, as it allows Yum! to attain predictable cash flow without much capital investment or operations management.

In addition to sales from new restaurants, Yum! had same store sales growth of 6% in China and 1% in the US. Same store sales for the YRI division (Yum Restaurants International) were flat. 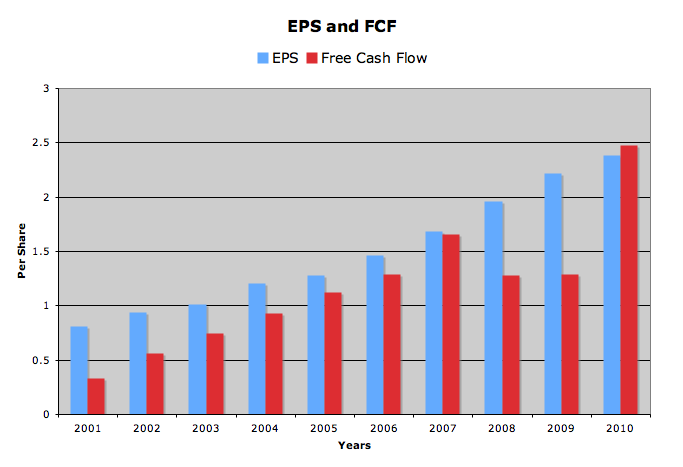 Earnings have grown by an average of 12.6% over the past 10 years, and analysts expect this to continue into the future, with a 5 year growth rate of 11.1%. $2.85 is expected in Fy 2011, and $3.19 in Fy 2012. Earnings have grown through a combination of sales growth, increased margins, and a share buyback program that has reduced outstanding shares by about 5.2% a year. In 2010, Yum! repurchased 9.8 million shares, using $390 million dollars. It’s great to see earnings growth as the result of a number of different metrics, rather than solely increasing sales or large buybacks. 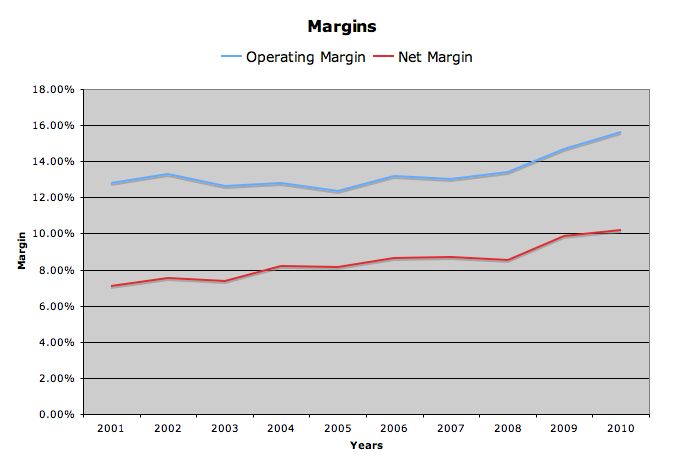 Margins have been trending upward, a positive sign, especially with increasing food costs putting pressure on restaurants around the world. As of 2010, Yum! had an operating margin of 15.6%, and a net margin of 10.2%. Since I tend to look at margins over time, 10 year average margins are as follows: Operating – 13.4%, Net – 8.4%

Yum! Brand is a relatively young company, having been spun off from PepsiCo in 1997 under the name Tricon Global. It wasn’t until 2002 that the name was changed, and Yum! Brands was born. 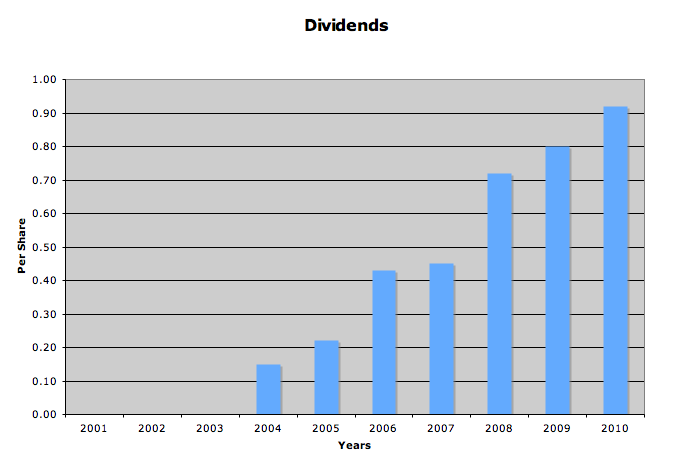 Yum! paid its first dividend in 2004, and has increased it every year since. The growth rate has been very high, and I would not expect the 5 year CAGR of 20.9% to continue far into the future. The past years dividend increase from $.80 to $.92 represents 15% growth, and I expect a number closer to this in the future. 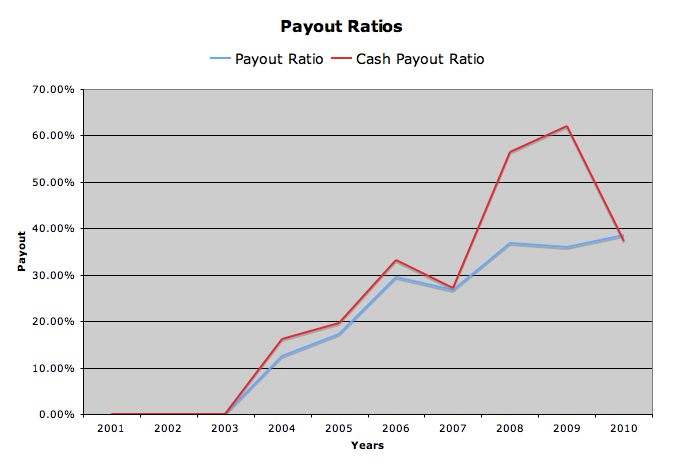 Yum! states in their 10-k they aim for a 35-40% payout ratio from earnings, and this is where they sit right now, both for earnings and cash. This gives Yum! plenty of room for growth, and the ability to maintain dividend growth even in a weak year.

The balance sheet is the first place that Yum! starts to show weakness. Debt comprises 68.2% of total capital employed, and this number is actually lower than 2009’s 75%. Interest coverage ratio is a bit lower than I would like to see at 10.1, and in the past has dipped as low as 6.7.

The current ratio is 0.94, slightly lower than the generally accepted “safe” level of 1. As of 2010, they had 1.4 billion in cash on the balance sheet, which should be enough to cover their short term borrowings if need be.

Return on Equity has been extremely volatile, reaching as high as 473% in 2001 and as low as 50% in 2005. This number has been inflated by their high debt and low equity (equity even being negative 94 million in 2008), and so does not paint a reliable picture. 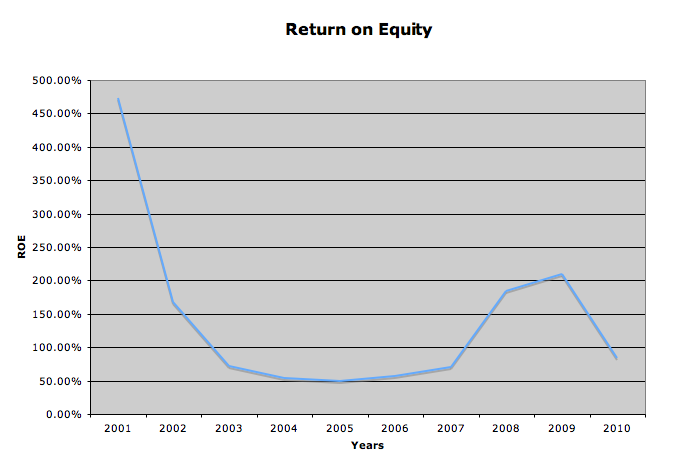 Similar to McDonald’s, Yum! has been focusing on it’s core business and selling off it’s ownership of smaller, less profitable operations. As of the fourth quarter 2010, both Long John Silver’s and the A&W brand restaurants have been put up for sale, allowing Yum! to focus on it’s main portfolio of Pizza Hut, Taco Bell, and KFC.

One thing I really like about Yum! is their multi-branding strategy. Rather than opening a second unit, which requires capital and operational management, Yum! has been focusing on co-branded restaurants, such as a dual KFC / Taco Bell. This allows them to increase sales and points of distribution without the added business costs of 2 units.

What I dislike about Yum! is the large debt load they carry, and the current price. I think a more reasonable valuation would be in the high 30’s, which would provide a yield closer to 2.5% and a p/e (ttm) closer to 15.

Full Disclosure: I do not own any YUM. I am long on MCD. My Current Portfolio Holdings can be seen here