This month has been full of ups and downs outside of my dividend income and net worth… which by the way are great this month!  With health problems and some huge bills we still managed to squeak out a positive month.  Let’s get to it! 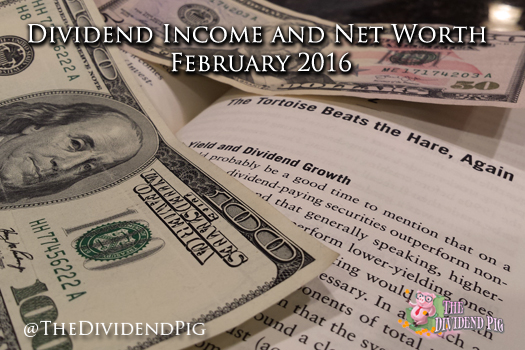 I am super excited to report we’ve set yet another monthly record!  February has been a light month in terms of payments for the last two years, but that seems to be changing.

This month I received $150.51 from 18 different companies.  That averages out to a little over $8.41 a paycheck per company for not doing a single minute of work for them!  Gotta love it!

*I own some companies in several different accounts.  That is why you see OHI & O listed more than once.

February has been an extremely stressful month and I must say, I’m happy it’s over!  My wife had her somewhat of an emergency surgery this month and the surgery portion went EXTREMELY well!  The initial biopsies didn’t show any signs of cancer, which was obviously a huge relief!  The recovery from the surgery has been somewhat challenging.  We’ve run into some rather unfortunate complications that has made the recovery very uncomfortable.

On the other hand, financially, February was an alright month and we are starting to move back in the right direction.

Let’s do the numbers… 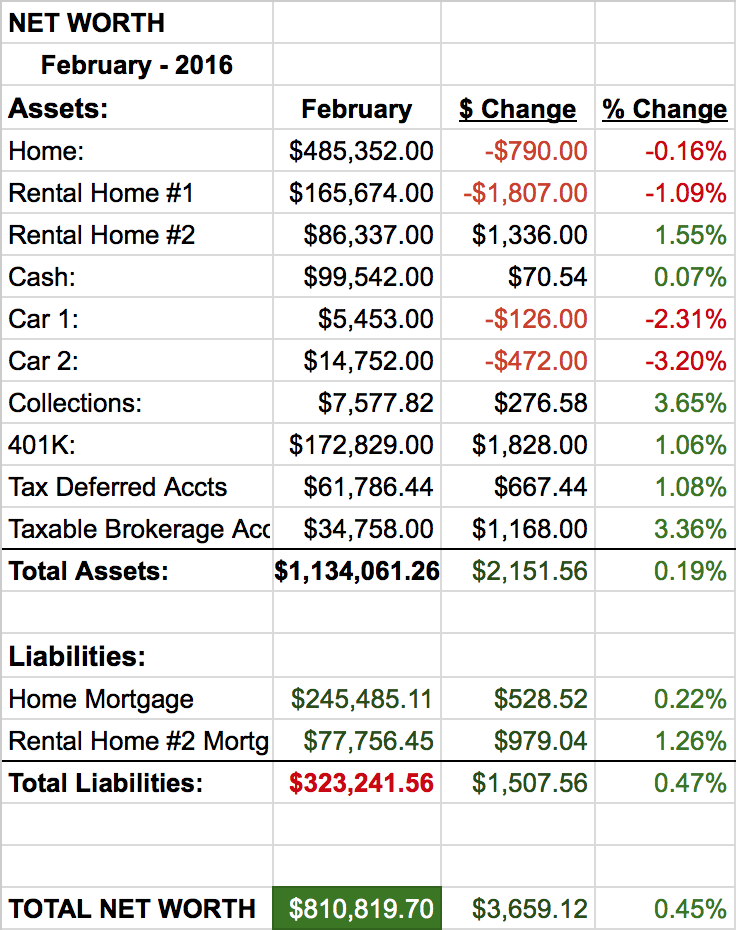 As you can see, we’re positive again!  Hopefully the net worth downward trend has stopped for awhile and we can get a few consecutive up months recorded.  Even with the rather large surgery bill we were able to go positive.

We’ve managed to stop our cash bleed temporarily and pull it up by .07%.  That really was quite an accomplishment with the quantity of doctor & hospital bills we’ve paid.  Sadly, there are plenty more bills to come.

Fortunately we have health insurance to cover us during these times.  And thank God we do!  The hospital gave us the bill for my wife’s surgery and my jaw nearly hit the floor.  The total was for a bit over $70,000!  YIKES!  The hospital bill also showed the insurance company’s negotiated rate which was slightly over $12,000.  And our portion for this big bill was just over $2,300… which is much more manageable.  The health care industry has some pretty ridiculous pricing.

I’m comfortable saying that I over estimated our out of pocket expense for her surgery in last month’s report.  It now looks like we’ll have to pay roughly $5,000 for her surgery and doctor visits which is a huge financial relief.

Looks like the greater Atlanta home values took a pretty healthy dip again this month.  According to Zillow, our primary home value fell considerably again, down 1.09% this month.  While real estate isn’t as volitile as the stock market, it is coming in a close second place.  I had no idea values jumped around this much… or maybe that’s just Zillow.

Zeroing out rental property #2 mortgage is our current objective.  We are chipping almost $1,000 off the mortgage monthly and are making great progress.  We’d like to have it paid off in under 4 years.

And the proper trajectory, down, for our car values has resurfaced.  This month we seem to be making up for the last two months of strange increases by dropping 3.2% on one car and 2.3% on the other.

So there you have it, not a bad month financially and some GREAT NEWS on the family health front.  I certainly got a big bump by investing that almost $11,000 over the last two months into depressed dividend growth stocks.  We’ll see if that actually turns out to have been a wise choice as the months go on.  I do feel like we are still in a troubling spot.  Prices have corrected a bit, but this could very well just be a bear market rally with lots of lower prices to come.  It does look like the S&P wants to hold at 1,810.  It will be interesting if we retest and fall through if the FED decides to keep up their projected interest rate raising pace.

How did you do this month?  Did your net worth also recover this month?

May Dividend Income and Net Worth Report – 2022