The auto parts group is by far the largest segment, and operates under the famous brand name Napa Auto Parts. This segment accounts for 50% of yearly sales.

Sales growth has averaged only 1.75% over the past 5 years – hardly an impressive number. Over the past decade, the picture is only slightly brighter, with average growth of 3.5%.

The company is seeing some rebound this year, and sales for the first six months of 2011 are up 13% year over year. All four segments have shown growth, including the laggard office products business, though the industrial and electrical group grew the most with a 19% increase in net sales.

The company’s chain of retail stores is continuing it’s trend of softening sales, with the discretionary segment being hardest hit. 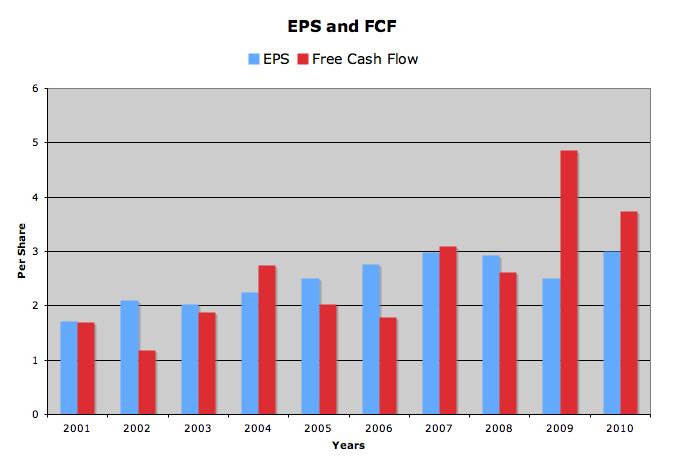 Free cash flow per diluted share has been the stronger metric, averaging growth of 20.4% a year over the past 5 years. Though it fell slightly in 2010, the $3.74 a share in free cash flow was still more than adequate to pay the $1.64 dividend. 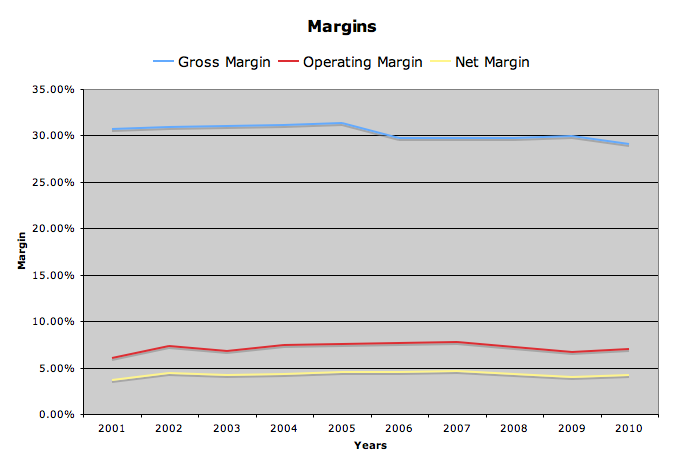 Margins have remained steady over the past decade, as shown by the graph above. I always prefer to see companies with stable or rising margins. To me, this means they have both a well run business, and a competitive advantage that gives them flexibility and pricing power.

GPC has paid a dividend every year since going public in 1948, and has increased its dividend consistently for 55 years. The latest increase came in February of 2011, when they increased the yearly dividend by 10% to an annual rate of $1.80 a share.

Looking at the rolling average dividend growth over 5 year periods, the highest was from 2004 to 2008, when the dividend grew by an average of 6.8% a year. I expect growth to be around the same going forward.

In addition to dividends, GPC has a nice stock buyback program, and has taken about 2.3% of stock off the market each year for the past 10 years. In 2010 GPC bought up 1.85 million shares, and at the beginning of 2011, the board was authorized to buy another 16 million shares. Year to date, they have purchased 1.1 million shares. 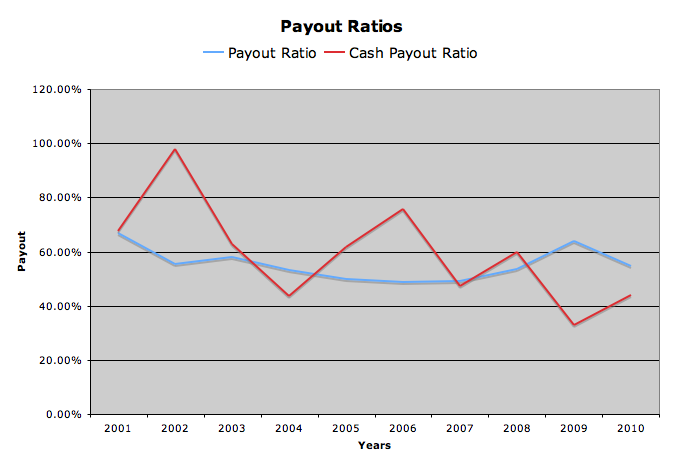 Payout ratios are both well covered. The earnings based payout ratio was 55% in 2010, perfectly in line with the 10 year average of, 55%.

The cash based ratio has gone down considerably over the years as cash flow growth has outpaced dividend growth, and though there were a few years that the payout ratio was higher than I would like to see, it now sits comfortably at 43%.

GPC has a solid balance sheet. Debt to total capital employed is a low 15%, and even at it’s peak in the early 2000’s debt was still under 30% of capital.

The current ratio is a solid 2.2, and the interest coverage ratio is safe at 28. 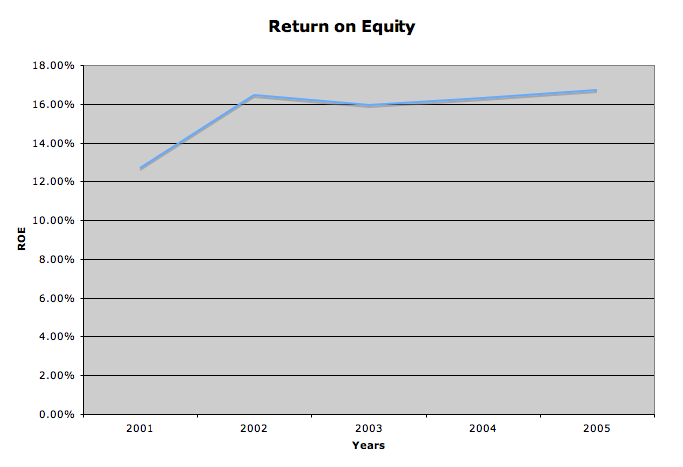 The return on equity for GPC is high and stable, especially considering their low debt capital structure. After a poor 2001, the ROE has stayed between 15% and 19% for the past 9 years.

While I find GPC to be a solid company, and one that I believe will increase dividends well into the future, I find the price to be a bit high. This company is a slow grower, even with their acquisition strategy adding to the bottom line.

With sluggish dividend and revenue/earnings growth, and a peg ratio of 1.1, I think it’s a bit overpriced. I would prefer to see a dividend yield closer to/above 4% if I am only expecting 6% average growth over the next few years. Still, this is a good company, and could be a nice addition to any portfolio at the right price.

Full Disclosure: I do not own any GPC. My Current Portfolio Holdings can be seen here